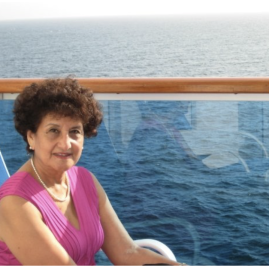 The ANA team is saddened to learn the passing of Ms. Bhadrika Sharma on March 19, 2019 in Lancaster, PA, USA.

A champion of ANA from its start, she was a life member of ANA. She was one of the leaders of ANA and also a leader of the community organizations in locations wherever she lived.

She lived most of her life in Toronto, Canada, and upon retirement, moved with her husband to Lancaster PA to be close to her sons and their families.

Ms. Sharma was a radiology professional and worked in a hospital in Toronto for more than two decades. She was a poet, a leader, a celebrated cook, community organizer and a women’s leader. She combined the qualities of being a modern woman, while remaining a traditional glue for her family.

She played a vital role in all of ANA’s activities including the annual conferences on July fourth weekends each year. She was managing the overall programs, while also volunteering in the registration desk, helping in food preparation, and organizing kids’ programs. She played a critical role in bring the ANA conference to Canada in 1988 and making is a success.

Ms. Sharma was one the stalwarts who conceived the establishment of the Nepal Educational and Cultural Center (NECC) in Maryland. She was one of the key financial contributors and motivators for the success of NECC, the first Nepali community center in North America.

Ms. Sharma was ahead of her times in advancing the causes of women, families and children. She was a pioneer in the community being one of the first health care professional in the Nepali community in Canada.

She was a member of the expert team who visited the BP Koirala Institute of health Sciences in Dharan, Nepal in 1993 to offer professional advice in the development of